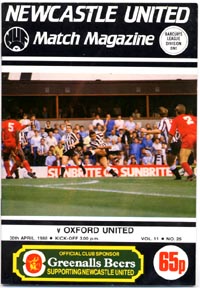 With Beardsley now gone too, United were once more being tipped to struggle until The Boy from Brazil arrived and the Fog on the Tyne was replaced by Samba Soccer. That was the theory anyway with Mirandinha being talked up by McFaul as the "new Beardsley."

Indeed although the little Brazilian certainly added a little magic to the Tyneside scene his absence through injury during the last two months of the season led to a young Irish teenager dubbed by some as the "new George Best" getting his chance.

Eighteen year old Michael O'Neill had been signed from Coleraine for only £100,000, but his scoring exploits towards the end of the season meant he overtook Mira in the scoring charts.

The League Cup brought an early exit to Wimbledon. In the FA Cup the Magpies progressed to the 5th Round for the second season running only to go out at home to Wimbledon once more.

An 8th placed finish was more than acceptable and the antics of Mira and Gazza certainly brightened up the Gallowgate, but nobody could overshadow Kenny's brilliant posterial ball control.

A poor start to the season put McFaul under tremendous pressure and rumours persisted that he was to be replaced; with Huddersfield manager Malcolm Macdonald's name often appearing in dispatches. The beleaguered Irishman was even convinced that someone in football was "undermining" and "sabotaging" him

McFaul claimed that he didn't like to criticise his players in public, but there were a number of post-match dressing room inquests where he let them know how he felt. And occasionally he did use the papers or the programme to make the players aware of his dissatisfaction.

Gazza was a particular challenge for McFaul and there were some rumours of a bust-up behind the scenes. Willie alternated praise with criticism to try and get the best out of him and desperately tried to persuade him to stay, but it was an impossible task.

All the time though McFaul stuck to his guns of trying to play football, the performances improved and United gradually climbed the table.

A significant turning point in the season came when Colin Sugget stepped down as first team coach (after the League Cup defeat at Blackpool) and was replaced by reserve coach John Pickering. He was a man who worked the team hard and, had vast experience and commanded great respect. At the end of the season Pickering would be the first ever United coach to be offered more than a season-to-season contract.

Willie McFaul was awarded and signed a new three-year contract. It was just reward for guiding United to their best League position tor over a decade under very difficult circumstances.

Most fans laid the blame for the club's predicament at the directors door as a result of Beardsley following Waddle in search of trophies.

Seymour stepped down as Chairman at the end of the season with Gordon McKeag replacing him. The Gosforth solicitor walking straight into the storm which was just starting to brew as Sir John Hall spearheaded a campaign to democratise the club.

Hall wanted a massive shake-up of the Board and a £5 miliion share issue which he claimed would allow fan's to have a stake in the club. The directors were having none of it claiming that Hall was an opportunist and citing the example of Robert Maxwell who was buying and selling clubs like a man who was spending other people's money (which of course he was).

By the end of May 1988 Hall had the necessary 10% shareholder support to force an EGM, but was a long way from the 51% required to overthrow the board and the 75% required to force a share issue. This story was set to continue.

The regulations introduced under the Safety at Sports Ground Grounds Act had forced United to demolish the old West Stand during the summer. Work had started on a new stand which would house 6,300 spectators and include 39 executive boxes.The stand was partially opened in January, with work not fully completed until the during the summer of 1988.

In the meantime a temporary stand (borrowed from Brands Hatch) was precariously perched atop the Leazes End; not surprisingly the average attendance slumped by 3,000.

The fans were not in the best of dispositions as Beardsley followed Waddle out the exit door during the summer and an undercurrent of antagonism and aggression existed throughout the season despite United's relative success.

The arrival of Mirandinha provided a welcome distraction and an unexpected boom in the sale of sombreros, but the little Brazilian would drive them nuts as often as he enthralled them. As a result he wasn't immune from the crowd's barracking; neither was the prodigal son Gazza and it was suggested that the abuse he sometimes received from the crowd was one of the reasons he left.

One person who couldn't take the heat was Glyn Hodges who was sold a couple of months after a £300,000 move from Wimbledon and complained that "St James' Park was one big pressure dome...and it's hard to do yourself justice in that atmosphere".

The main wrath of the fans was reserved for the directors and chants of "sack the board" and "Seymour Out" where aired on a regular basis. and Chairman Seymour further incensed fans when he claimed that "no-one would expect Newcastle to beat Liverpool if they were honest" after United had been thrashed 4-1 at home by them.

Fans continued to cause trouble on their travels and when dozens of fans were prevented from attending Hillsbrough due to their rowdy behaviour a police spokesman said "the one trouble with Geordies is that they like their drink too much".

The worst trouble was when United played at Derby towards the end of the season when 33 United followers were arrested for various offences including a drunken rampage through a Nottingham suburb.

Missile throwing had become a bit of an epidemic with United yobs disgracing themselves on a number of occasions. The worst example was when Charlton's Colin Walsh was pelted as he lay injured with a broken leg.

After the final home game of the season (against West Ham) around 200 fans clambered over the fences. Most of them were youngsters who made do with running around a bit, but some swung on the crossbar and damaged it. There were also chants of "sack the board" and secretary Cushing blamed the Evening Chronicle (who were firmly backing the Hall campaign) for "incitement".

As Gascoigne prepared to take a throw-in near The Corner a Mars Bar was thrown at him. Gazza, with his usual whimsical touch, tucked it into one of his socks before later taking a bite. The next home game saw a few more confectionary items arrive.

When Luton beat Newcastle at 4-0 at Kenilworth Road some of their behaviour really riled the Newcastle players, so when the return match saw the scoreline reversed they decided to get their own back. Kenny Wharton started the fun by sitting on the ball and Gascoigne and others jpoined in. At the final whistle Luton captain tried to confront Kenny, but luckily Anderson intervened.