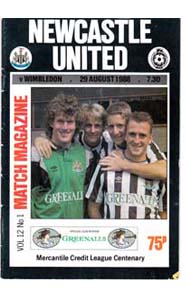 This was a disastrous season for the club, but United's downfall was put into perspective by the horrific scenes at Hillsborough and the emotional farewell for Jackie Milburn. It was a season when tangible hope turned to real despair.

There was a mixture of optimism and fear before the start of the new season. McFaul had - on paper - signed a quartet of decent looking players: Dave Beasant, Andy Thorn, John Hendrie and John Robertson. However we had not only sold Gascoigne but, arguably more importantly, we had also lost Paul Goddard.

It only took a matter of seconds at Goodison Park for the United fans to find out which emotion would dominate. Thousands had travelled to Goodison Park in celebratory mood, but United became badly unstuck against the Toffees.

Although there had been insufficient time for the new players to be assimilated McFaul was sacked after a poor start. Without a succession plan in place United floundered around for six weeks and plunged to the foot of the table.

The United heirarchy's embarrasment was finally ended when they persuaded the experienced Jim Smith to take charge. With two thirds of the season left and - on paper - a reasonable side, there was every reason to believe that the situation could be rectified.

An upturn in form followed Smith's arrival, but it did not last and he decided to embark on a major mid-season rebuilding programme. As a result a grand total of 35 players were used during the campaign. His plan failed and United were relegated having spent the whole of the season in the bottom four.

The average crowd actually rose but the disenchantment with the Board was getting into full swing with "Sack the Board" becoming the most popular chant and sit down protests becoming a regular occurrence. The supporters gained a new mouthpiece as "The Mag" appeared on the streets for the first time.

However there was a different aspect to the protests this time as a group of high powered and influential business men led by John Hall formed the Magpie Group with the publicised aim of democratising the club. It was to be the start of a massive battle of power with new Chairman Gordon McKeag.

Four defeats in the first seven games resulted in McFaul being sacked and the failure to land a new permanent manager brought another five defeats which saw the Magpies plummet to the bottom of the table.

Jim Smith was appointed and two wins and two draws in his first four games suggested better times ahead, but four defeats followed.

Smith's attempt to drastically remodel the side failed and United's League record during 1989 was 3 wins, 5 draws and 11 defeats resulted in relegation. During the whole campaign the highest position attained had been 17th