Despite never hitting top spot throughout the season United finished in second and were back in the big time. It was their home form (18 wins, 1 draw and 2 defeats) that saw them through.

New manager George Martin had arrived from Luton and he and the directors adopted a controversial and high-risk policy whereby they completely revamped their attacking options.

Wayman, Shackleton, Bentley and Pearson were all sold with the money being re-invested to strengthen other parts of the team.

Martin also made the shrewd tactical decision to move Jackie Milburn in from the wing to become the club's new No 9.

Charlton were again United's tormentors in the Cup, but the early defeat meant that the old adage of concentrating on the League could apply.

The average League attendance was the highest in the country and a record breaking 56,298. 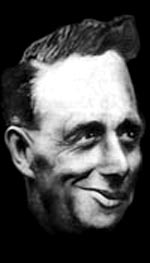 Despite securing promotion in his first year at the club it was anything but a smooth ride for George Martin.

The team's performances were often not up to scratch especially in the first half of the season and he was not afraid to chop and change. It was not unusual for 5 or 6 changes to be made at a time.

Martin and the directors adopted a very bold approach in the transfer market as they effectively sold 4/5 of their strike force.

Neither were they interested in currying public favour as crowd favourites Pearson and Shackleton were allowed to leave. Indeed it was clear that they were more concerned with rooting out those that they perceived as "disruptive elements".

They certainly didn't believe they were in the wrong. Chairman George Rutherford made this clear on a number of occasions; "No club in the country can do more towards the comfort and happiness of it's players" he claimed

On Shackleton's transfer request he argued: "surely it is reasonable for a club to put a player on the reserve team...without expecting the man left out to immediately seek transfer."

Transfers both in and out were on a scale never witnessed before or since as (in the 13 months from July 1947 to July 1948) United spent £54,500 and recouped £47,050. Although it doesn't seem much now, it is put into perspective when you consider that the fee received for Shackleton (£20,050) was the record fee at that time. 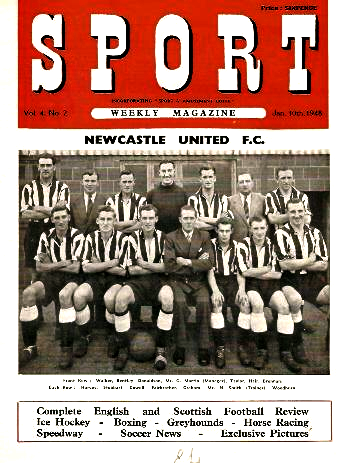 The Post War attendance boom showed no sign of waning as the total attendances for League games climbed to over 40 million.

And for the second year running the best supported team in the land was Newcastle with an average attendance of 56,299 (a record at the time).

Even this does not tell the full story as a record-breaking 44,840 turned up for the friendly verses Liverpool and the reserves averaged almost 13,000 a match.

There were five sixty-thousand-plus gates and St James' was creaking at the seams, Newcastle's Lord Mayor even suggested a new "super stadium" should be built on the Town Moor.

The departure of Len Shackleton was mourned by many and workers at the Vickers factory even mounted a "Keep Shack" campaign.

The BBC were still trying to persuade the authorities to allow live televising of games' and although the FA were in favour the Football league did not want to know.

They had wanted to televise United's FA Cup 3rd Round tie with Charlton, but under pressure from the League Charlton refused to accept it.